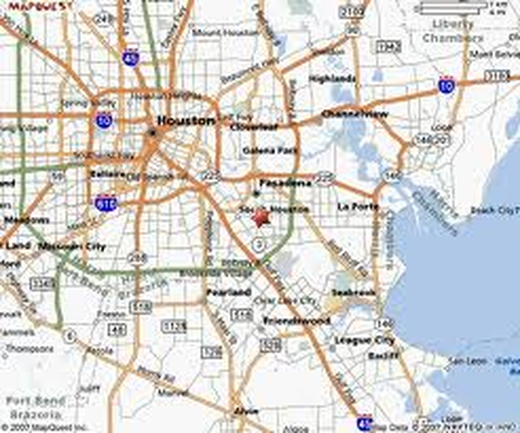 read about pasadena in wikipedia

16th Century
Early European Exploration and Settlement
1519 - Mid - Spanish explorer Alonso Alvarez de Pineda maps Texas
coastline.
1528- Alvar Núñez Cabeza de Vaca shipwrecked near
Galveston begins exploration.
1541 - Francisco Vázquez de Coronado
crosses the Texas Panhandle in search of in search of the seven cities of
Cibola.
1554 - Coronado dies. He is one of the first white men to explore
Texas, and leader of one of 20 Spanish explorations of the area.
1598 - April 30 - Thanksgiving is held near present-day El Paso by Juan de
Oñate, the members of his expedition and natives of the region.

19th Century
Texas grows and American settlers are coming
1810 - Sept. 16 - Father Miguel Hidalgo y Costillo and several
hundred of his parishioners seize the prison at Dolores, Mexico, beginning
Mexico's struggle for independence from Spain.
1812 -August 8 - About 130-men strong, the Gutierrez-Magee
Expedition crossed the Sabine from Louisiana in a rebel movement against
Spanish rule in Texas.
1813 Texas' first newspaper, Gaceta de Texas, founded by José Alvarez de
Toledo in Nacogdoches.
Dec. 26 - Spanish government grants Moses Austin permission to establish
a colony of Anglo-Americans in the Texas area. When he dies the following
June, his son, authority to continue the
colonizing effort.
1814 - June- Moses Austin dies, his son, Stephen F. Austin,
receives authority to continue the colonizing effort.
1817-1820 - Jean Laffite occupied Galveston Island and used it as a
base for his smuggling and privateering.
1818 - September 12 - A hurricane wrecks the fleet of pirate Jean
Lafitte in Galveston.
1821 -Aug. 24 - Mexico gains independence from Spain.
1823 - Jan. 3 - Stephen F. Austin received a grant from the Mexican
government and began colonization in the region of the Brazos River. Mexican
officials approve Austin's plan to bring three hundred families into his
colony. This group becomes known as the "Old Three Hundred."
Mid-1824 - Constitution of 1824 gave Mexico a republican form of
government. It failed to define the rights of the states within the republic,
including Texas
1826 - Dec. 21 - The Declaration of Independence of the republic of
Fredonia is signed at Nacogdoches.
1827- January 31 - This so-called Fredonian Rebellion is an attempt
by empresario Haden Edwards to separate his colony from Mexico. The rebels
flee when approached by Mexican troops.
1829 - October - First of several large groups of Irish immigrants
arrive to settle in South Texas.
1830 - April 6 - Mexican government stops legal immigration into
Texas from the United States except in special cases. Relations between Anglo
settlers and the Mexican government deteriorate.
1831 - Johann Friedrich Ernst, his wife and five children are the
first German family to arrive in Texas, settling in present-day Austin
County.

Revolution and the Republic of Texas
1832 - June 26 - First bloodshed of the Texas Revolution takes
place at Velasco when Texans, transporting a cannon from Brazoria to
Anahuac, are challenged by Mexican forces at Velasco. The Mexicans surrender
on June 29.
1835Oct. 2 - Mexican troops attempt to retrieve a cannon that had been given
to Gonzales colonists for protection from Indian attack. The skirmish
that ensues as Gonzales residents dare the Mexicans to "Come and Take It"
is considered the opening battle of the Texas Revolution.
1836 March 2 - Texas Declaration of Independence is adopted at
Washington-on-the-Brazos.
1837 - Republic of Texas is officially recognized by the United
States, and later by France, England, the Netherlands and
Belgium.
1839 - Aug. 1 - First sale of town lots in the new capital
of the Republic, which is named for Stephen F. Austin, is held.
1840 -

1841 - June 20 - The Santa Fé Expedition, launched without Texas
Congressional authorization by Pres. Mirabeau B. Lamar, leaves Central Texas
on its way west to establish trade with and solidify Texas' claims to
territory around Santa Fé. Members of group are taken prisoner by Mexican
troops, marched to Mexico City and imprisoned. They are finally released in
1842.
1842 - The first seeds of large-scale German immigration to Texas
are sown when a German society, the Adelsverein, purchases land for
settlements in Central Texas.
Annexation and Statehood
1845

1846
1848 - Feb. 2 - Treaty of Guadalupe Hidalgo is signed, ending the
War with Mexico and specifying the location of the international
boundary.
1850


1854 - Two reservations are established for Indians in West-Central
Texas: one for Comanches on the Clear Fork of the Brazos in Throckmorton
County, the other for more sedentary Indian groups, such as Tawakonis,
Wacos and Tonkawas, near Fort Belknap in Young County.
1856 -


1858 - Sept. 15 - Southern route of the Butterfield Overland Mail
crosses Texas on its way between St. Louis, Mo., and the West Coast. Service
discontinued in March 1861 at the outbreak of the Civil War.

July - Indians on the West-Central Texas reservations are moved by the
federal government to reservations in Indian Territory (now Oklahoma).


1865 - May 13 - The Battle of Palmito Ranch is fought near
Brownsville, after the official end of the Civil War, because word of the
war's end at Appomattox on April 9 has not yet reached troops in Texas.

1871 - May - Seven men in a wagon train are massacred at Salt
Creek, about 20 miles west of Jacksboro, by Kiowas and Comanches led by
chiefs Satanta, Big Tree, Satank and Eagle Heart.
1872 - Oct. -
Construction begins on the Texas & Pacific Railway; the 125-mile stretch
between Longview and Dallas opens for service on July 1, 1873.

1877 - Sept. - The El Paso Salt War is the culmination of a long
dispute caused by Anglos' attempts to take over salt-mining rights at the
foot of Guadalupe Peak, a traditionally Mexican-American salt source.

1881 - Dec. 16 - The Texas & Pacific Railway reaches Sierra
Blanca in West Texas, about 90 miles east of El Paso.
1883 - Sept.
15 - The University of Texas classes begin.
1884 -
Fence-cutting wars prompt the Texas Legislature to pass a law making
fence-cutting a felony.
1886 - Aug. 19-21 - Hurricane destroys or
damages every house in the port of Indianola, finishing the job started by
another storm 11 years earlier. Indianola is never rebuilt.
1888 - May
16 - Present state capitol is dedicated.
1891 - The Railroad
Commission, proposed by Gov. James Hogg, is established by the Texas
legislature to regulate freight rates and to establish rules for railroad
operations.
1894 - June 9 - Oil is discovered at Corsicana; a
commercial field opens in 1896, becoming the first small step in Texas' rise
as a major oil producer.
1898 - May 16 - Teddy Roosevelt arrives
in San Antonio to recruit and train "Rough Riders" for the First Volunteer
Cavalry to fight in the Spanish-American War in Cuba.
1898-1899 -
Texas experiences its coldest winter on record.


1901 - Jan. 10 - Oil found by mining engineer Capt. A.F. Lucas at
Spindletop near Beaumont catapults Texas into the petroleum
age.
1902 - Poll tax becomes a requirement for voting.
1906 - Texans votes for US senator in the Democratic primary,
although the Texas legislature retains ultimate appointment authority,
primary voters can express their preferences.
1910 - March 2 - Lt.
Benjamin D. Foulois makes first military air flight in a Wright brothers
plane at Fort Sam Houston in San Antonio.
1911-1920 -  Mexican civil war spills across the border,
as refugees seek safety, combatants seek each other,
and Texas settlements are raided for supplies by all sides in the
fighting. Pancho Villa and his followers are active along the border during
some of this time.
1916 - Texas voters able to directly elect US senators.
1917-1918 -  World War I.
1917 - Gov. James Ferguson is impeached and convicted; he leaves office.
1918

1928 - June 26-29 - The Democratic National Convention is held in
Houston, the first nominating convention held in a Southern city since 1860.
1929 - Feb. 17 - The League of United Latin American Citizens
(LULAC) is founded in Corpus Christi.
1930 - Sept. 5 - The Daisy
Bradford #3 well, drilled near Turnertown in Rusk County by wildcatter C.M.
(Dad) Joiner, blows in, heralding the discovery of the huge East Texas Oil
Field.
1935 - Two years after federal prohibition was repealed, Texas
voters ratify the repeal of the state's prohibition law.
1936 - June
6 - Texas Centennial Exposition opens at Dallas' Fair Park; it runs until
Nov. 29.
1937 - March 18 - A massive explosion, blamed on a
natural-gas leak beneath the London Consolidated School building in Rusk
County, kills an estimated 296 students and teachers. Subsequent deaths of
people injured in the explosion bring the death count to 311. As a result,
the Texas legislature requires that a malodorant be added to the odorless
gas so that leaks can be more easily detected.
1941-1945 - World War II.
1943 - June - A race riot in
Beaumont leads to a declaration of martial law.
1947 - April 16 -
The French-owned SS Grandcamp, carrying ammonium nitrate, explodes in the
Texas City harbor, followed the next morning by the explosion of the SS High
Flyer. The disaster kills almost 600 and injures at least 4,000 more. The
concussion is felt 75 miles away in Port Arthur, and the force creates a
15-foot tidal wave.
1948 - Lyndon B. Johnson beats Coke Stevenson in
the US Senate race by 87 votes. The winning margin in the disputed primary is
registered in Ballot Box No. 13 in Jim Wells County.
1949 - Aug. 24 - The University of Texas Medical Branch in Galveston admits its first
black student.
1950 - The US Supreme Court orders racial integration
of The University of Texas law school.
1953 -

1954 - Texas women gain the right to serve on juries.
1958
-Sept. 12 - Integrated circuit, developed by Jack Kilby at Texas
Instruments, Dallas, is successfully tested, ushering in the semiconductor
and electronics age.
1961 -John Tower wins special election for US
Senate, becoming the first Republican senator from Texas since
Reconstruction.
1962 - NASA opens the Manned Spacecraft Center in
Houston. The center moves to a new campus-like building complex in 1964. It
is renamed Lyndon B. Johnson Space Center on Aug. 17, 1973.
1963 -
Nov. 22 - President John F. Kennedy is assassinated in Dallas; vice
president Lyndon B. Johnson succeeds to the office, becoming the 36th US
president.
1964 - Poll tax is abolished by the 24th Amendment to the US
Constitution as a requirement for voting for federal offices. It is retained
in Texas, however, for state and local offices.
1965

1967 - Mexican American Legal Defense and Educational Fund (MALDEF)
is incorporated in Texas; its first national office is in San Antonio.

1969 - July 20 - Apollo 11 astronaut Neil Armstrong transmits the
first words from the surface of the moon: "Houston, the Eagle has landed."


1974 - Jan. 8 - Constitutional Convention meets to attempt to write
a new state constitution. However, the delegates, comprising the membership
of the 63rd Legislature, become mired in divisive politics, and the
convention adjourns on July 30, 1974, without a document.


1979 -April 10 - Several tornadoes kill 53 in West Texas, including
42 in Wichita Falls, and cause $400 million in damages.
1984 -
The no-pass-no-play rule is part of an education-reform package enacted by
the Texas Legislature.